Yesterday the Feminisms Fest was all about why we’re feminists. Today’s question is: why does it matter?

I read Emily Joy Allison’s post this morning about how feminism matters to her because of her younger sisters, and chuckled, because she basically wrote my post for me. But there’s a difference in our stories, and I’m still going to write my own post.

The reason feminism matters (okay, ONE reason it matters — I have a lot of other reasons) to me is because when I was introduced to the ideas of feminism, I was given the language to talk about the cognitive dissonance I was seeing in the circles I grew up in (homeschool, conservative, Christian), what I now loosely call “Christian patriarchy.”

Having the language to talk about a problem or a pain or a fear makes that issue become manageable in new ways. Naming your pain gives you power to confront the source. [I want to talk about this more! But that’s another post.]

So when I learned terms like “slut shaming” and “objectification” and “invalidation” and “privilege,” I suddenly found myself able to describe why strict modesty teachings and checklists and surveys made me uncomfortable, why I didn’t want to make a big deal about whether or not I had my first kiss at the altar, why I would be furious if an authority figure didn’t want to listen to me because I was emotional, why it bothered me so much that white Republicans were so vested in the “pro-life movement” (e.g. why did they care so much about women’s reproductive rights?). The language of feminism gave me a voice.

And it gave me a voice after these issues became intensely personal. When I got married, it was in the midst of great tension with my father. He resented that we didn’t ask his permission to kiss for the first time, wanted to be able to tell me it was unwise to marry someone with student loans and have me respond with deference to his preferences, and told my ex that when we got married he would be transferring his authority over me to my ex.  He was upset that we didn’t submit to his advice but instead consulted our consciences and the Bible and decided that we were okay with agreeing to disagree on certain “grey area” issues — to him, these were not grey areas. They were black and white areas of Christian conviction and to disagree with him was to “reject” his authority and  set a bad example for my younger siblings, leaving him open to the risk of family insurrection if my siblings decided to follow my path and make the same choices I did.

[Why he believes these things is his own story and I disagree with the results but with respect to the origins, as he has valid cause to act the way he did. But it’s an example of this sort of thinking, which is why I tell you about it.]

After all that happened, after I got married in spite of his objections [which, for the voyeurs wondering, had nothing to do with where we’re at now], I followed the path of my feminist explorations, moving from literary theory into contemporary feminist dialog. And oh, man. It set me on fire.

Now, I knew how to talk about my story. Now I understood why things hurt me or bothered me. Now I saw why I had felt so helpless to respond well when I didn’t have the vocabulary to form my ideas and responses. And having the language to talk about these things gave me the ability to start blogging here, start talking to people about what had happened, and start identifying systemic issues in conservative Christian culture which perpetuate unintentional invalidation and marginalization of women.

I see a lot of women and girls living in this world still, and while it makes me sad that they’re still “stuck” in Christian patriarchy and often defend it with eloquence and sincerity, I realize that (with the risk of sounding arrogant, so forgive me) most of them don’t see the system (they haven’t transgressed it, so they don’t know it’s limiting them) and most of them don’t have the words to describe it, even if they sense a disconnect between ideas (like: be a critical thinker! but submit to the authority of your father/pastor/husband’s teachings; we respect and cherish women! but they have to adhere to complementarian gender roles to be godly women). They can’t talk about it if they don’t have the words for it.

Which is why, when I see stories like the one about the girl who finally left the Westboro Baptist Church, I cheer. The language of feminism indirectly made this possible. She got out because she had the language to start asking questions. And that is the key to freedom.

But without the language to discuss things, to ask questions, these women in Christian patriarchy are left with expressing how lonely they are waiting at home for Prince Charming, how exhausting it is to be 25 with 5 kids under 6, how scary sex is as a newlywed (without any sex ed), how they wished their dads would be more involved or loving, somehow (but they can’t explain it), how depressed they are at the thought of just being another stay-at-home mom and how they feel compelled to start a home business or something so they don’t get bored when it inevitably happens.

Without the language, these women amaze me in their ability to endure difficulty, to be creative and celebrate individuality within their limited spheres, with their capacity to love despite being disrespected and not listened to. It’s incredible and it’s a beautiful testimony to the power of the soul to withstand much trouble.

But, should they have to? Is it necessary? Is it worth it? I’d argue that it isn’t, and I get so, so excited when we start talking and I see them trying out new words and new ideas and learning to talk about their experiences and gain confidence to ask questions. Seeing the beauty of a soul being restored to health after years in a barren land is the most wonderful thing, and feminism’s language has shown itself to be the key to this healing over and over again.

Feminism can help you talk about why it hurts. How to fix it, how to bring nuance and humanity and grace back into the discussion of women’s roles in the home, society, and the church. It can free you from the childishness of a world that is only black and white, right and wrong, good and bad, and let you walk out of the farmhouse and into the technicolor of Oz. It’s a beautiful world that we have here and it’s okay to enjoy it. I think that Jesus would walk out there with you.

Link up with FemFest here! 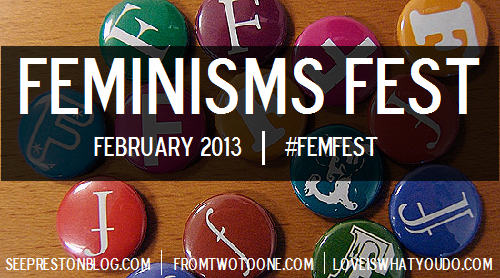 View all posts by Eve Ettinger

13 thoughts on “Why it matters: picking the lock of Christian patriarchy”